A Call to Serve Others: KCU Student Shares EMT Experience

Inspired by his faith and his upbringing, a call to serving others has been a long-standing priority for Student Dr. Ryan Hoffman, (KCU-Joplin 2024). As a lifelong witness to service within his own family – his father, an osteopathic emergency physician, his mother, a nurse practitioner and his grandfather who worked closely with Habitat for Humanity and other charities, Ryan is following in their footsteps.

“Having been raised in the Methodist church, I like to refer to Matthew 25:40, which states that ‘whatever you did for one of the least of these . . . you did for Me,’” Ryan explains. 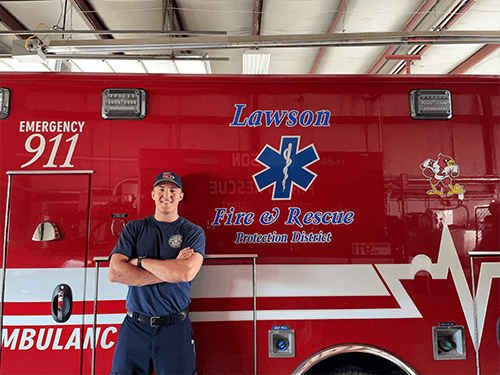 The United Nations Public Service Day is observed on June 23. It “recognizes the work of public servants and encourages young people to pursue careers in the public sector” - young people like Ryan, who has worked since 2017 at Lawson Fire and Rescue Protection District in Lawson, Missouri, covering 24-hour shifts on weekends and as needed throughout the school year. Presently, he picks up various shifts over KCU’s winter and summer breaks.

“After high school, I wanted to find a part-time job that would give me exposure to the medical field. I managed to enroll in an EMT class on top of my freshman undergraduate courses,” Ryan said. “My job title is EMT-B and firefighter. I am a nationally certified emergency medical technician and I work alongside a paramedic on an ambulance in the event of a medical dispatch.”

The nature of the calls he responds to range from non-traumatic lift assists to serious myocardial infarctions. He also helps fight fires.

Serving as an EMT provides skills that will benefit Ryan in medical school and in his future career as a physician, such as learning about airway patency, effective ventilation (breathing), and circulation; patient communication; the ability to keep a level head during crises and increased tolerance for casualties that may be present.

“If you look at the extraordinary life lived by A.T. Still [the founder of osteopathic medicine], he was a servant to countless people across the Midwest. As a child, I doubt he ever imagined his work would start a movement,” Ryan said. “When I was young, I admired EMS workers and firefighters, but I never thought I would become one. It’s remarkable the places you can find yourself with a certain skill set and the willingness to serve as A.T. Still did.”

Ryan encourages future medical students to keep in mind that titles such as “doctor” or “student doctor” must be earned, along with a lesson his physician father passed onto him: “Being a true leader in health care requires humility and a heart for serving your community.”

As Ryan gains experience and learns to become a physician, he is appreciative of the opportunity to serve others and especially the people in Lawson.

“I get this sense of pride and responsibility when I put the uniform on, because people place a lot of trust in public safety,” Ryan said. “We are looked upon as a beacon of hope in the event of a catastrophe or unforeseen circumstance.”

KCU is grateful to all who serve in public service capacities, like Ryan, his family and fellow osteopathic student doctors and physicians. Thank you for your service.

Please join us in congratulating the following faculty, staff and students from the College of...